After three years of construction, the Franklin Grist Mill was completed in 1837.  This was the same year that Michigan gained its statehood. The construction was started by W. Matthews.  Matthews purchased the large tract of land near the Mill’s current location and began the mill in 1832.  Unfortunately, due to financial difficulties, Matthews could not finish his project.

The property was purchased by Peter VanEvery who completed the building and opened it as a gristmill on the banks of the Franklin River. He became the miller for an area that included many miles for grain farmers in all directions.  VanEvery also had many other enterprises in the Stoughton and Bullock Settlement, which is now Franklin.

Ownership of the Mill changed hands several times during the late 19th and early 20th centuries. Around the turn of the century, the Franklin Grist Mill was flooded and shut down until the property was purchased in 1918 by Robert McKee.  McKee changed the mill from a grist mill to a cider mill and stipulated that the cider season would run from August 15th until January 1st.

The Franklin Cider Mill changed hands only one more time in 1966. Jack Peltz, a new resident in Franklin, purchased the Mill.  In 1968, just two years later, another flood left the Mill in a jam.  The flood washed away a 30-foot section of the road that the Mill stands on.  The road was fixed but the power that was provided by the water wheel was lost.  Regular electricity was installed in the Mill that year, 1968. Possession of the Mill has remained in the Peltz family.  As a family tradition, we are preparing the next generation to operate the mill.

The state of Washington is #1 in producing apples. They produce about four times more apples than any other state. New York and Michigan are the #2 and #3 producers, respectively.  The Franklin Cider Mill is  proud of the apples grown in Michigan and use only Michigan apples for our cider.

The Franklin Cider Mill, like other cider mills and orchards, has a reputation of having a lot of bees buzzing around (especially when families are trying to have a nice, relaxing picnic!).  These bees are precious and critical to the production of apples, fruits and vegetables.  In the spring, these busy bees pollinate Michigan’s apple tree blossoms turning apples into a very nutritious and delicious fruit. The more blossoms, the more fruit.  To help manage our bees, please be sure to place all cider mill papers, cups, bags, and plastic jugs into their designated trash receptacles located throughout the mill’s property.

The Franklin Cider Mill is a one-of-a-kind living piece of history.  We take pride in our family-friendly atmosphere and strive to provide exceptional service.

•  We press and bottle our own cider at our Mill! Each side of our double press can hold up to sixty bushels of apples.

•  The average yield is approximately three gallons of cider per bushel of apples.

•  Our cider season opens Labor day weekend and remains open until the first weekend after Thanksgiving.The apples are sorted and washed before going into the grinder.  We make our cider with only the best, clean apples!

•  Usually between eight to twelve hundred bushels of apples are sorted on the second floor of the Mill. There the sorting, washing and feeding of the apples into the grinder is done. The video in our customer area shows this process for visitors to see.

•  In the main visitor area, you can observe our cider being pressed.  We press daily.  On weekends we have multiple presses each day.

•  The Franklin Cider Mill donuts are made fresh and on demand each day.  Our unique donuts are from an old German spice recipe. We have proudly served the same warm donuts that have been served with our cold cider for over 80+ years.

•  The cider at the Franklin Cider Mill is NOT filtered, NOT pasteurized, and does NOT contain any form of preservative.  It is a pure apple juice and MUST be kept refrigerated.

Labels and business names similar to ours are now being used by others and can be confusing. Please remember that there is only one outlet for our products, which is . . .THE FRANKLIN CIDER MILL! 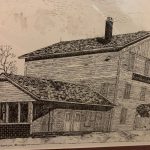 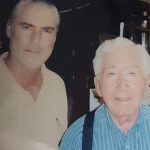 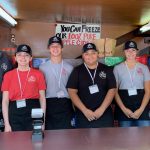 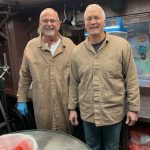 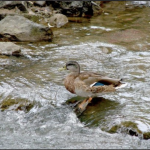 Corner of 14 Mile Rd and